When next month’s UK general election is concluded, either the Labour or Conservative Party may have to rely on the support of seats won by their smaller rivals to form a government that functions effectively.

Since 2018, the Liberal Democrats has welcomed a number pro-EU MPs who had defected from the Conservatives and Labour thus pushing them up to 21 MPs.

A very tall order for the Liberal Democrats to achieve but as the one true pro-EU national political party, they are hoping to get substantial votes from Labour and Conservative supporters who are anti-BREXIT.

Current Liberal Democrats leader, Jo Swinson, is quite rightly having a tough time on the campaign trail defending her voting record in government which influenced a rise in poverty for many UK residents. Swinson’s current attacks on Tory cuts to public spending lacks any credibility or authenticity. We all know that in terms of policies and intentions, both the senior Liberal Democrats and Conservative ministers in that coalition government were very close.

The more you hear Swinson during campaign the less convincing she comes across as  tenable and liberal.

[Nick Clegg and Danny Alexander, two of Swinson’s former Liberal Democrats senior colleagues in government – who were key architects of those savage cuts to public spending – have done well for themselves since they lost their seats in the 2015 general election. Clegg is head of global affairs and communication at Facebook and Alexander is vice president and corporate secretary at Asian Infrastructure Investment Bank in China]

This week Swinson added to her growing reputation as a neo-Conservative at heart when she stated her preparedness to use nuclear weapons if necessary.

SNP leader Nicola Sturgeon is looking to strengthen their hold north of the border by taking votes from Labour and the Conservatives. Since the 2015 general election the SNP has had the most seats from Scotland at Westminster when they nearly swept the table winning 56 or the 59 seats available. By the 2017 general election the SNP were down to a more reasonable 35 seats thanks to a Conservative Party resurgence under then new Scottish leader Ruth Davidson.

Davidson’s resignation in August is a blow to the chances of Boris Johnson holding on to the gains made by her in Scotland. As a result we could see the SNP cementing their grip at Westminster as the third largest political party.

If Labour leader Jeremy Corbyn “wins” the most seats he will need to rely on the support of the SNP to form a solid coalition than that of Swinson’s Liberal Democrats. Under such a SNP/Labour coalition it would be political suicide for Sturgeon to push for any independence referendum.

Sturgeon as First Minister is a solid leader in the Scottish parliament at Holyrood. She comes across as down to earth, confident, assured and thinks well on her feet. Despite some teething issues over education the SNP under Sturgeon has been a steady ship in the devolved assembly.

Sturgeon’s debates with Davidson were by far more constructive, combative and mature than those down south between Corbyn and Cameron/May/Johnson. Davidson had held her own against Sturgeon at the dispatch box as both were more formidable than their national counterparts in Westminster. Real shame that the London-bias media largely ignores Scottish politics.

I get the sense though that some English based voters would prefer voting for the SNP rather than the current options available to them locally.

But one of the things to look out for from the Scottish vote is whether the recent sexual assault charges filed against Alex Salmond – Sturgeon’s predecessor and former mentor  – could hurt the SNP at the polls.

The BREXIT Party is the fly in ointment in this unusual general election.  The party did well in this year’s EU election but winning seats in Westminster is altogether a different beast to conquer, given it is based on first-past-the-post.

Dear Leader Farage is a master communicator and manipulator. He knows which buttons to press to get his target audience on his side. Farage has managed to sway both some hard left figures to his party on this single issue of leaving the EU.

Whenever Farage is backed into a corner by valid points made by Jo public he sometimes gets flustered. Unlike the political class that has failed terribly to outfox this cheeky chappy of modern UK politics.

Farage is no numbskull and has backed away from contesting a seat in the election as he knew perfectly well that he would lose. Farage had initially declared that the BREXIT Party would contest approximately 600 seats.

But in some sort of back-door deal with Boris, Nige has – without consulting his senior colleagues – decided that the BREXIT Party will not contest 317 seats. This surprising move by Farage is aimed at giving the Conservative Party a clearer chance of winning key seats ahead of Labour and the Liberal Democrats. Farage has promised to focus on those Labour-held seats that voted for BREXIT in the EU-referendum.

This move has infuriated a number of BREXIT candidates who were revved up for the election and now have also lost their deposits. When asked by LBC radio’s Eddie Mair if he will return the deposits to those candidates no longer running, Farage simply said “No”.

A few days ago Farage asked voters to elect some BREXIT Party candidates in order to “hold Boris Johnson to his word”. Sounding desperate Nige?

The only places I could see the BREXIT Party coming close to winning seats would be  in Essex and the Midlands. I would be amazed if Farage’s party would find success in the north east of England as some polls have predicted.

Just like Farage’s earlier incarnation as leader of UKIP, I expect the influence of the BREXIT Party to diminish by 2020. As Farage always ends up walking away to cook up another caper which could be the case if a Labour-led government pushes for a 2nd EU referendum .

The Democratic Unionist Party (DUP) held 10 of the 18 seats in parliament and those MPs were crucial to the survival of the shaky minority Conservative government since 2017. The DUP leadership must be in a tailspin at the thought of their old enemy Corbyn becoming PM. But they would be partly to blame.

The impact of BREXIT is probably more significant to the Northern Ireland region than any other part of the UK as a result of the border with Ireland. But the DUP must still be reeling from being thrown under the bus by Boris in his quest for an express EU deal by the 31st October.

In the 2017 general election the republican leaning Sinn Féin had their best ever result when they won 7 seats. But as usual Sinn Féin never took up their places at Westminster owing to the party’s stance against taking an oath to Queen Elizabeth II. Sinn Féin have said they will not stand in 3 seats in order to give the nationalist leaning Social Democratic and Labour Party a better chance of defeating the DUP.

It would be interesting to watch if Sinn Fein changes their long standing stay-out-of-Westminster stance if their winning seats could usher Corbyn into Downing Street.

The Pro-EU Change-UK Party was formed this year with much fanfare following the defection of some sitting Labour & Conservative MPs. The buzz they created fizzled out quickly with many of the founding leaders switching to the Liberal Democrats or sitting out this election altogether. It will be a tall order for the remaining 4 candidates – including leader Anna Soubry – to return to Westminster. But Soubry’s absence would be a loss to parliament.

A Unite to Remain alliance has now been formed by candidates from the Liberal Democrats, Plaid Cymru (Welsh Nationalist) and the Green Party all of whom are 100% pro EU. Thus each party would support just one candidate across 60 constituencies in order to get more pro- EU MPs in Westminster and stop BREXIT in its tracks. In the last concluded parliament Plaid Cymru had 5 MPs and the Greens 1.

If this alliance manages to win even two thirds of their target seats then they would have done extremely well and cost Corbyn dearly.

All to play for. 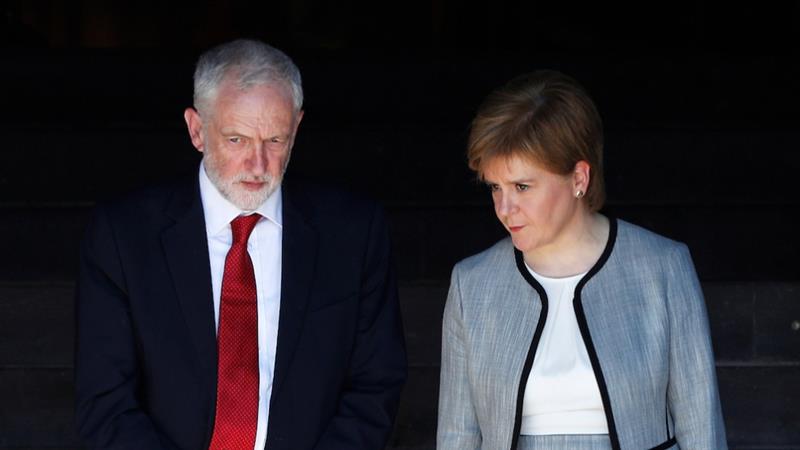 Corbyn & Sturgeon could be singing Auld Lang Syne together into 2020