GB Election 2019: The Fountainhead in Farage

You have to hand it to Brexit Party leader Nigel Farage though. The man has made a successful cottage industry for himself and complete fools of many of us with his fight against the EU. The man has cemented his tag as the UK’s anti-EU bogey man for the political class.

The cult that is Faragism was created thanks to his record number of TV appearances (33) on BBC’s Question Time since the early 2000s. Even when you think he is getting out of politics for good, the man makes a sudden u-turn and maximise his selfishness to soothe that mega-ego of his.

Farages oratory is pitch perfect. His persuasive  arguments are put in the simplest and clearest tone and it works a treat. Farage has rattled then PM’s Tony Blair, David Cameron and Theresa May; leaving them scrabbling for the right words to match his deliberations. Blair’s government advisers in particular always went into a tizzy at the sound of any EU “outrage” bellowed by Nige in media land.

But Farage has managed pool support from leading far right and socialist leaning figures in his drive for a speedy BREXIT, which is no mean feat.

Current PM Boris Johnson has made countless overtures to appease the wrath of Nige. Farage has been in a self congratulatory mood lately. Nige felt that the Conservative Party has included in its current manifesto some of his long held ideas from when he was leader (2006-2016) of the UK Independence Party (UKIP).

In the fall out over the BREXIT debacle Farage has been the one real winner.

Despite his anti-EU stances Nige has managed to get elected as a MEP in a place he purports to hate and gets paid handsomely for it. It’s like watching one of those old British comedy farces from Ealing Studios.

[British voters have this knack for making some unorthodox choices in the name of democracy. During the 2002 Hartlepool mayoral election a football club mascot called H’Angus the Monkey was the victor. So voting for a party that hates the EU to work in Brussels makes perfect British sense.]

Farage has thrived on catchy themes: “independence day from the EU” and “taking back control” and “get BREXIT done”. But Nige you cheeky “Arthur Daley” mucker, the UK controls next to nothing of real substance anymore that’s on home soil.

[Arthur Daley was a 1980s TV character from the comedy series “Minder”. Daley was a lovable rogue, a wordsmith “in his own lobster” who was pro-Maggie Thatcher and anti-EU]

The UK arms manufacturers, banks, utility companies, airports, supermarkets, landmark properties, media and major football clubs are mostly owned by overseas companies and other countries. Even many of the buildings where UK civil servants are based are now owned by overseas registered companies who pay little tax.

Yet most of the above countries mentioned have tight patriotic restrictions on the sale of their key assets to potential foreign investors. e.g. In August 2018, the New Zealand government passed a law banning non-residents from buying property excl Australians and Singaporeans.

Britain is the only country on the planet to sell off its entire water infrastructure to private investors. 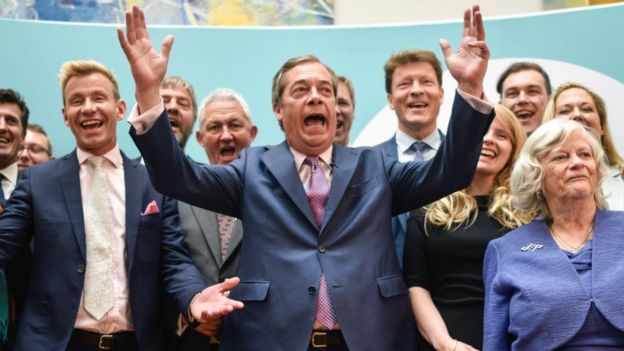 So who really sold out GB Inc. Nige?

It was Farage’s then Conservative government of the 1980s that started off this reckless unconditional sale of prime UK assets to all and sundry. Subsequent audit reports did reveal that most of these former public assets were grossly undervalued at the time of sale. At that time Farage was working as a stockbroker in the City of London when these privatised assets created a boom in profits for those in the square mile.

Some of the current high profile members in Farage’s raging BREXIT Party (e.g. Ann Widdecombe) were paid up members of the Conservative Party when Britain sold its soul in the name of a very short sighted ideology called unconditional and under valued privatization.

[Some of the current senior die-hard pro-BREXIT Conservative MPs such as John Redwood were also at the heart of the privatisation of these prime assets. So it is a bit rich to hear Redwood moaning about the influence of the EU on UK society.]

Subsequent Labour and Conservative governments (1990s-2010s) perpetuated this fire sale which has left Britain as easy pickings. Farage has not even bellowed a fart over this short sighted policy which was more damaging than anything metered out from Brussels. At least in the EU the UK government can veto or just ignore certain legislation it disagrees with. As the French and German governments have constantly done.

Imagine, some of the UK’s most sensitive govt buildings is owned by, well…

Today, “Independence” from the EU – without a sensible deal means – being a cast-iron lapdog to Donald Trump’s (where Nige’ is already in a set position) and lead to the sale of the few remaining key assets and self respect to the US and other circling venture vultures. With the NHS, BBC, ports and welfare system are clearly up for grabs.

As we draw to a close to the most eventful decade in UK politics Farage is clearly in the running for UK politician of that era. Nothing much has been achieved in this period but Nige has made a killing for himself.

“He (Farage) was a natural-born salesman,” recalls Alex Heath, a fellow broker. “Setting up on your own requires backing and it requires people who believe in you and Nigel is very good at getting people to believe in him.” – FT 2015 1 Response to GB Election 2019: The Fountainhead in Farage