Tutu is Right about Blair 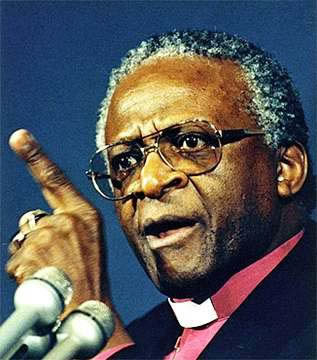 Archbishop Desmond Tutu is right not to share a platform with Tony Blair at a conference in South Africa on leadership.  The Archbishop argued that former UK Prime Minister Blair and US President George W Bush had lied to get the West to invade Iraq. In fact Tutu strongly feels that both men should be brought to the International Court to face war crimes against humanity.

I completely agree with the Archbishop on his stance. Blair was offered £150,000 to attend the conference whilst Tutu was offering his services free of charge.

The Archbishop has simply stated what a lot of UK residents feel should have happened to Blair. Currently Blair is seeking to reinvent himself and get back involved in UK front politics again after having to resign as PM a few years ago and hand power to Gordon Brown (less said).

Tony Blair must be the most hated and discredited politician in the UK today. Nick Clegg, current UK Deputy Prime Minister, is the main current hate figure in UK Politics but at least some in his Liberal Democratic Party colleagues still support him. But as for Blair his own Labour Party grass roots supporters were aghast and felt ashamed that he blindly joined up with Republican George  W Bush to launch a war in Iraq. Both men and their hawkish supporters ignored the statements From the United Nations Inspectors on Weapons of Mass Destruction (WMD) that there had not found such artillery. At the same time Blair ignored those within his own Intelligence Service at the Ministry of Defence as well as MI6 to pursue he wish to stand side by side with Bush in the Middle East.

Both men had used the excuse that Saddam Hussein had ignored the first UN resolution (on inspections) that was passed as a reason to invade Iraq. How many UN resolutions have Israel ignored on the Palestinian issue?

Blair has always been the great actor of UK politics. He acted his way through the left leaning Labour Party to become their leader – even if his views on politics were more Tory leaning. But his performance in the House of Commons during the debate on the proposed war was a master class in acting and I could not believe that MPs from both the Labour and Tory party were so convinced the UK had to go to war with Saddam. The people in the knew his was economical with the truth on Iraq.

Some of my own colleagues in Whitehall were angry with Blair long before then. The way Blair treated civil servants on a whole on government matters was unprofessional and ignore civil service protocol at all times to get his way.

It has since come out in reports and from people on the battlefront that there was no WMD but Blair and Bush have since used the toppling of Saddam as valid enough reason to have committed so many troops and Iraqi civilians to their demise.

Millions of UK residents protested publicly across the country against the war going ahead. But Blair ignored them. The late much missed Robin Cook resigned from Blair’s government rather than support the war and gave in my opinion the best political speech I have ever seen in real time. But Cook was maligned for his stance and sadly passed away not long after.

Tony Blair won 3 consecutive elections as leader because he was a brilliant communicator. Whether he was telling the truth or not Blair knew how to work the mass supported by his big false smile. But lying and committed troops and civilians to their deaths or injuries was unforgivable and not long after win his 3rd term in office he just had to resign. Since his departure from front line politics his Labour Party suffered a humiliating defeat at the last general elections.

So the Archbishop is so right in his stance against Tony Blair. I wish some of the UK politicians were bold enough to make similar statements. But most in the Commons did blindly support him and have shame and egg on their faces even today.

Can you imagine if a democratically elected African leader had done something similar to Blair and lied/committed his troops to invade another country with such fatal consequences? He/She would have had an international arrest warrant out on them to dragged before the Hague.

Maybe Archbishop should attend the conference and make a citizens arrest of Blair.

2 Responses to Tutu is Right about Blair