During this extended period of shutdowns, lockdowns, meltdowns, social distancing and sanitization overload, thankfully horse racing has been a welcome distraction for those who follow the sport, especially in the UK and Ireland.

Many folks that’s known me well over the years would be surprised to learn that I am a big fan of horse racing, but not just any old horse racing.

I like some sports with a certain degree of passion. But when it comes to horse racing such personal enthusiasm is on another level – especially jump racing, Irish jump racing. Yet it has nothing to do with my wallet because I have not gambled for years.

Maybe that love of horse racing goes back to my childhood days of 1980s Old Harbour, Jamaica where I  sat on horses at a farm in the community during the summer holidays. Old Harbour from the 1910s to the 1960s was the centre of Jamaican horse racing with its Little Ascot race track hosting race meets until it was officially closed in the late 1950s. But the track and grand stand (then described in the 1920s as futristic ) remained in use until it got sold off.

There was even a time when I had my own riding boots and headgear for a few sessions in Central London. Long story.

But there is something about horse racing in the UK and Ireland that has always stimulated my brain cells. Yet the racing in Ireland is a sport that deserves wider coverage and greater rewards, which leads me on to reviewing last week’s Cheltenham Racing Festival held in Cheltenham, Gloucestershire, England.

Cheltenham Festival is the Olympics of jump racing for the thoroughbred fraternity from the UK and Ireland. Each year, those 4 days in March brings about one of the best sporting theatres you will see anywhere.

The crowds are generally buzzing, the atmosphere is raucous and friendly and the horses and jockeys deliver endless excitement from the Tuesday to Friday. The emotions of the stable staff, owners and trainers is something to behold.

But with the pandemic still with us, thankfully Cheltenham Festival 2021 show went ahead.

No crowds, no owners, no bookmakers, not even the amateur riders were allowed at the Festival. But the horses, jockeys and media gave us socially distant fans a celebration of racing to remember.  But top British race horse trainers such as Paul Nicholls, Dan Skelton, Nigel Twiston-Davies and Colin Tizzard may think otherwise given they had no winners over the 4 days.

Not even the ghost of the disgraced Irish trainer Gordon Elliott’s ban could overshadow what was a terrific amphitheatre of racing and in particular the continued success of Rachael Blackmore who finished as top jockey of the meet with 6 winners. A tremendous feat when you think of the numerous heavy falls Blackmore had during the week from a number of horses.

The Irish winning 23 of the 28 races came as no surprise. Irish racing over the past 2 decades has been top draw, fiercely competitive at all levels and horses never stop delivering excellent finishes. Their trainers and jockeys consistently give great informative interviews to the media.

The prize money is far better in Ireland and Graded (top class) happens Sunday to Saturday unlike in the UK where such races occur mainly on Saturdays.

Throughout the season the Irish raiders have cleaned up on some of the big handicaps on UK soil. No doubt an Irish horse will start favourite for the Grand National despite English trained Cloth Cap currently holding that lofty tag.

Even one of those British wins was rather hollow this week given Galvin was only running under an UK tag because his real trainer, Gordon Elliott, received a 1 year suspension just days earlier for sitting on dead horse while posing with his phone.

Despite Elliott’s ban some his horses manage to do well under the names of other trainers knowing full well he will return to the stables. This did leave a bad taste in some punters mouth.

But Rachael Blackmore is just something else. Like I side 2 years ago about her rise to the top of the Irish jockey circuit ‘let’s just be lucky to have her and enjoy her success”.

Blackmore has this knack having the horse she is riding in the right place and with a winning chance. She is tough and uncompromising when fighting for a good position in the races. Her male colleagues know that any little gamesmanship from them in the race would not ruffle her.

It is really tricky to pick out which of Blackmore’s 6 wins was her best because they were all super smartly judged rides. Her victory on Honeysuckle (Champion Hurdle) has to get a mention and the mare remains unbeaten and a people’s favourite.

But her ride on Allaho to win the Ryan Air Chase was breathtaking given the speed that horse was going over the last 5 fences. Even Allaho’s trainer Willie Mullins (top trainer at the Festival) was taken aback by the horse’s performance.

Full marks to the media who placed a tiny camera on jockey Harry Cobden in the Ballymore and we were able to see Blackmore on Bob Olinger just crept up next to Cobden and find 3 extra gears and just whoosh away Bob Olinger flew.

Still loving this footage of Bob Olinger eyeballing Bravemansgame in the Ballymore yesterday and then whispering in his ear "Is that all you got?"#CheltenhamFestival pic.twitter.com/Le2o2CtpJB

Blackmore jumped off Minella Indo to ride the other de Bromhead horse, A Plus Tard and came a close 2nd. The scary thing is that de Bromhead  still has Monalee at home still to come into the reckoning for the 2022 Gold Cup.

Delighted to see trainer Sue Smith won a big handicap with the timeless Vintage Clouds. A win for the North whose record at Cheltenham is never great.

Predicting winners or placed runners at the Cheltenham Festival is near on impossible. But I do like to put my wits down for the big meets and to my surprise I did pick 16 winners and 6 runners up including the 1-2 in the Gold Cup.

Easy-peasy it may seem but studying Irish form in real time meant to me for Cheltenham have one simply strategy – avoid English trained horses.

I even managed to select Joe Kidder in the Fred Winter who won at a staggering 80/1, odds that baffled me given trainer Noel Meade was up to something with winning pilot Sean Flanagan, who literally flew into Cheltenham from Ireland under his new pilot licence.

The Gold Cup won by Minella Indo, under a spare ride for Jack Kennedy, was just a terrific race. The riding was superb. The runner up, A Plus Tard, under Blackmore did not jump as well as expected but fought relentless to try and reel in the winner.  Kennedy and Blackmore were just exceptional throughout the 4 days and it was fitting that they fought out the Gold Cup.

Despite winning 6 races Blackmore must thinking what could have been had she stayed on Minella Indo. But you have to say Kennedy looked so smooth and relaxed on Indo from word go.

2 Cheltenham Festivals ago Kennedy, on a hot favourite (trained by Gordon Elliott) chased home Blackmore who won with Minella Indo at 50/ in the Albert Bartlett.  [3rd was the aforementioned Allaho]

Who would have thought that in 2021 Kennedy would win the Gold Cup on Minella Indo from Blackmore and not a Gordon Elliott horse in sight?

That sums up jump racing for you. There’s always drama, a story or 2, the odd scandal and in the end, racing fans cannot wait for the next instalment of the Cheltenham Festival. version 2022.

But for now Blackmore’s brilliance is something to treasure. 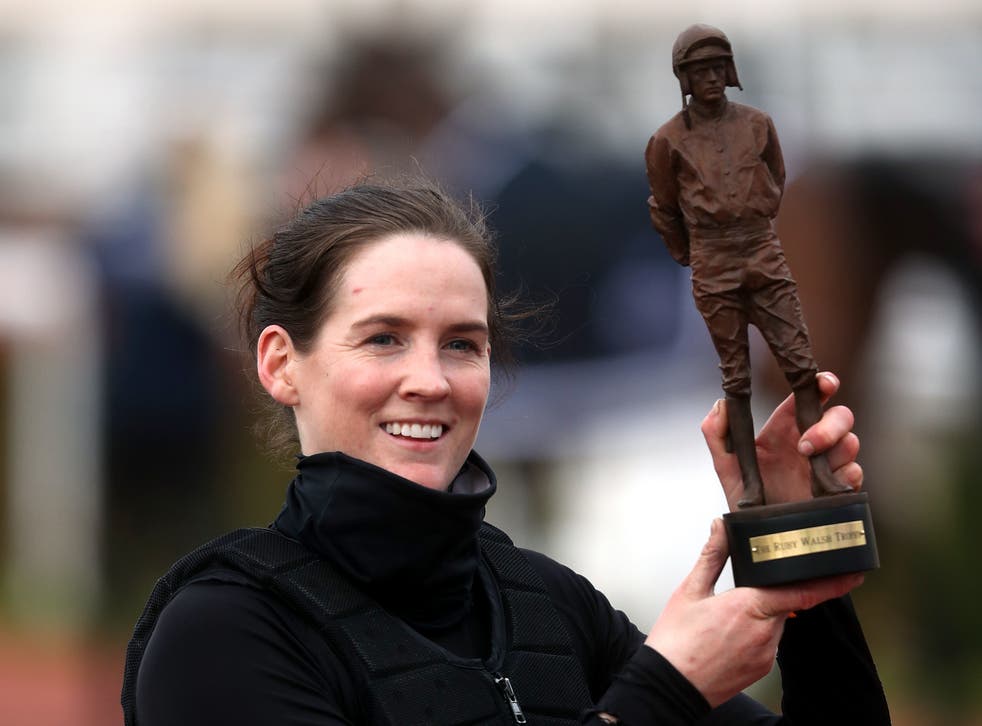 Blackmore – 6 of the best