What I Learnt During the Pandemic Week Ending 4/7/20

In Jamaica I Learnt..

Politically, it has been a week of reports of corruption, nepotism and cronyism against some high profile Members of Parliament.

The 2 reports by the Integrity Commission (IC) into the Petrojam scandal – that’s dogged the current government since 2018 and led to the resignation of government minister Andrew Wheatley – were published.

The IC reports highlighted high levels of corruption, conflicts of interest, nepotism, cronyism abuse of authority by certain public officials linked to Petrojam. The IC has suggested that law breaking may have been committed and recommended that further probing is carried out by another state investigative body.

In the case of Ramharrack the IC report was highly critical of her diabolical governance and HR practices given she was so unqualified for the position from the outset.

In the aftermath of the report being made public, Prime Minister Andrew Holness came out in support of Wheatley. Both were seen (pic below) hours after the reports were published at a NHT (National Housing Trust) handover ceremony in Wheatley’s constituency of South Central St Catherine.

The Intergrity Commission Special Report of Investigation Conducted into Allegations of Acts of Irregularity and/or Impropriety, Conflict of Interest, Corruption, Nepotism, Cronyism and Favouritism at Petrojam Ltd

According to reports in Friday’s Gleaner Lisa Hanna has been allegedly caught in her own cesspool of cronyism, nepotism and bad practices in her constituency of South East St Ann. Excerpts from the Gleaner:

“Lisa Hanna, a legislator and spokesperson for the Opposition People’s National Party’s (PNP) election campaign, has escaped criminal charges but has been slammed for nepotism and cronyism in the award of millions of dollars in contracts in St Ann in a ruling by the director of public prosecutions (DPP).

Richard Lake, the husband of the St Ann South Eastern member of parliament, might, however, be at risk of being charged.

The ruling has been with Integrity Commission since July 2019 but has not been made public. And DPP Paula Llewellyn, who, on Thursday, confirmed sending her opinion to the anti-corruption body, declined to comment on the matter.

“During an appearance before the OCG, Hanna explained that she selected the contractors because they “proved to be trustworthy”.

But the DPP said: “Mistake, misjudgement, negligence, or even dishonesty in the award of government contracts are not in, and of themselves, sufficient or conclusive to establish a foundation for a criminal charge.”

The DPP’s assessment, which was also sent to the police, was scathing. It argued that the OCG’s report revealed a “culture of negligence and/or unethical management in the award of contracts developed in the St Ann Municipal Corporation acting under the aegis of Ms Hanna

The DPP ruled in July 2019: “There was no allegation or evidence that Hanna “departed” from established procurement procedures and that a prosecutor could not prove “either wilful misconduct or abuse of public trust “It cannot be said that as a matter of law, the articulated justification is patently irrational,”.

Hanna has responded via social media – “It’s time to stop misleading and desperate journalism.”. Hanna rarely does straight ahead interviews.

In light of these developments how can Hanna remain a member parliament’s oversight bodies such as the Public Accounts Committee? As Hanna can not have any moral compass to question public servants over their own alleged bad practices of (legal) cronyism, nepotism and malfeasance (CNM).

With the general election looming this Hanna fallout was a test of the Phillips’ leadership given he has been lambasting the JLP government over their own alleged ties to CNM.

So it was mind-boggling to see the PNP issue a statement fully supporting Hanna rather than allowing Hanna to first face questions from the media. Phillips should have asked for the report on Hanna to be published, hold a news conference with Hanna and face the music.

Hiding behind written statements and social media postings shows a lack of courage and highlights the hypocrisy of the PNP leadership.

One of the common issues in both the Wheatley and Hanna cases is the role of constituency staff.

We know these constituency staff members are hired for their loyalty and subservience. So carrying out certain duties on behalf of their political bosses can come with nerve wracking consequences.

Let’s hope these staff members are allowed union membership to protect themselves as they can ill-afford to hire the big lawyers (as their MP bosses can do) when the proverbial hits the fan.

When caught out by their alleged acts of nepotism and cronyism, the political class and  tends to fall back on the mantra that they did not do anything criminal or illegal (as per today’s PNP statement backing Hanna). Their dubious actions might not be criminal but it is clearly dishonourable.

The Americans will take note of these latest developments and when the visas start getting revoked, the reality of the political class’ actions will start to sink in.

Abraham Lawrence – released after being jailed for 20 years without trial

Elsewhere in the Jamaica, the long term incarceration of innocent poor black Jamaicans without trial is at crisis levels. Abraham Lawrence was released this week after spending 20 years in prison without trial. His charge? Causing indirect damage to a police car window during an altercation with another man. According to legal representatives Lawrence’s papers “got lost in the system” and was left to rot. Lawrence is mentally ill.

Lawrence (centre) –  The Have Nots 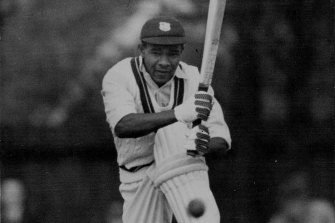