UK Deportations to Jamaica – Could have happened to Raheem Sterling?

The latest deportations of British residents with Jamaicans connections is thankfully been highlighted and challenged aggressively in the media, parliament, courts and on the streets of Westminster. Even well known right wing talk-show hosts have been disgusted by the devious actions of the Conservative government.

The Home Office under previous Labour and Conservative governments have long played hard and fast to deport Jamaican-Brits for the slightest excuse.

[The Home Office have since 2000 had a habit of using scare tactics to humiliate some black Jamaican-born UK residents by locking them up in immigration detention centres and taking away their passports for years. Some of these legal residents lost everything – their jobs, homes and could not complete their further education studies. Some ended up having mental heath issues.]

But the current Conservative govt has taken such deportations tactics to a darker level. It will get worse if the Jamaican-UK community does not stay alert.

Deporting fathers of young children in this manner is just wrong and wicked. No doubt the children of those deported will feel it hard and the effect on their long term well being must be of concern to the community. You just know social services will be hovering to make life even more complicated as these kids adapt to no father figure in their lives.

The deportation move against Reshawn Davis should resonate with someone like English football star Raheem Sterling.

Davis 30, came to the UK from Jamaica at age 11 and lived in North West London. By the time he was 19/20 he was convicted for robbery and sentenced to 10 years (I presume he served half).

It is said that Davis has turned his life around  and started a family as well. By all accounts England made Davis and thus he should have been allowed to remain to continue his development/rehabilitation.

Sterling came to the UK from Jamaica at age 5 and also grew up in North West London around the St Raphael’s Estate (Stonebridge) and Wembley areas. During that time Sterling was removed from mainstream education and attended Vernon House Special School as well as the controversial Copland High School.

“He (Sterling) gradually overcame anger management issues, and the stigma of being labelled by social services as having special educational needs was neutralised by his footballing ability.”  – Michael Calvin, Daily Telegraph

Thankfully, Sterling had the right kind of supporting system that allowed him develop his football talent. He was able to hone his football skills further in West London at Queen’s Park Rangers. Then his family opted for Liverpool Football club to get as far away from the temptations of North West London gang culture.

In 2013 Sterling – now at Liverpool – was cleared of assaulting a former girlfriend. Sterling now had the financial means to hire a top QC (now a circuit judge) and this would have aided his chances greatly to clear his name.

If Sterling was still living at St Raphael Estate in 2013 as a typical black teen and faced similar charges (+cheap legal team) – who knows what the jurors at Brent Magistrates, London would have then decided?

Thus Sterling could have fitted the criteria now used for deportation…

For decades if you were black, lived on the St Raphael Estate and attended Copland you were stereotyped by the police, education and social services as trouble and on the fast track to prison life. Even a former teacher of Sterling (Chis Breschi) once told him

“If you carry on the way you’re going, by the time you’re 17 you’ll either be in prison or playing for England.”

Copland was long been a troubled school decades. But Sterling got through it and he has given back much needed support to the institution known today as Ark Elvin Academy.

Raheem earned plaudits for his reaction to racist chants he faced at a football match at Stamford Bridge last season. He spoke out. It was a turning point in how the wider English community viewed him.

This why even a like of a tweet or a one liner by Sterling on the deportations could bring  some comfort to the victims and those in the front line fighting on their behalf.

We know from endless surveys and reports that black Caribbean people are discriminated when it comes to employment, education, mental health, social services and the criminal justice system. We also know in the customs and immigration service there has been a long history of discrimination and disrespect of black Jamaican travelers.

“Young black people are nine times more likely to be locked up in England and Wales than their white peers” – Ministry of Justice, 2017

It is hard to imagine any of those with drug/driving offences who are now facing deportation to have had the kind of criminal record of UK born musician Pete Doherty. Yet Doherty kept getting off lightly compared to the average black person caught in the criminal justice system.

” (2009) He was spared jail but was ordered to pay £2,050 in fines, and was banned from driving for 18 months, despite the court hearing Doherty had 21 previous drug offences and six motoring offences.“. Yet still Doherty has not mended his ways.

Voluntary groups (e.g. Windrush Movement UK, Joint Council for the Welfare of Immigrants), immigration lawyers (e.g. Jacqui McKenzie), media (e.g. Amelia Gentleman) and other individuals have all done an amazing job in giving voice to the plight of these Windrush victims and their cousins. Social media has been tremendous in sharing critical information in real time.

The struggle continues on many fronts and pressure must be applied to the decision makers at Home Office HQ. We have to watch every move this Conservative-led Home Office does going forward on immigration and policing when it comes to our community. 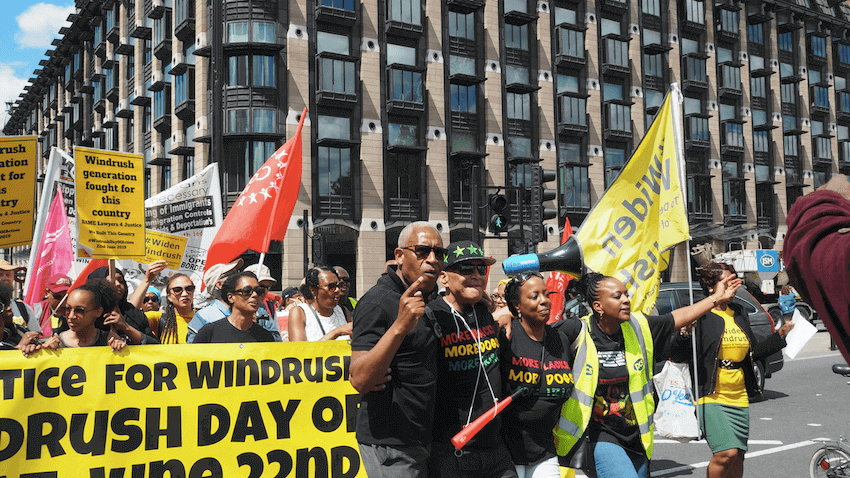 The Clout of the Celebs

We know that in today’s pop culture that governments tend to be more receptive and jittery when celebrities rally behind a cause critical of their policies.

Which celebrities from the Jamaican community will become the activists on this issue of shameless deportations?

What stops the UK government from bringing in more draconian laws and guidelines that gradually strips away the further rights from Jamaican-born UK residents? Even if they hold British passports.

So to the likes of the Raheem, Lenny Henry, Ian Wright, Zadie Smith, Linford Christie,  Naomi Campbell, Jourdan Dunn and especially Tory London mayoral candidate Shaun Bailey – Speak/tweet/insta out. These could be your cousins one day.

A powerful Friends of Jamaica lobby is needed at the heart of UK political life that draws from all political persuasions, media and business – similar to other minority pressure  groups. Too often the UK politicians of Caribbean descent have stayed silent whenever their own party is in government driving harsh anti-immigration measures against their own.

We should not be leaving it to Nick Ferrari to sum up this ongoing crisis so perfectly. Well said Nick.

1 Response to UK Deportations to Jamaica – Could have happened to Raheem Sterling?