Jamaican Athletes and the Statue Debate

Last Sunday, the Jamaican government unveiled a statue of the sprint icon Asafa Powell at Statue Park, National Stadium. The statue was created by Basil Watson.

In previous decades statues have also been created for the likes of former athletes Herb McKenley, Merlene Ottey, Arthur Wint and Donald Quarrie

The statues-for-athletes policy has become a hot topic and some are questioning if there are necessary. There are indeed necessary but such honours should be done after the athlete has retired from the sport.

Some observers have questioned why other former athletes were not treated with the same kind of public acclaim. E.g. Deon Hemmings, Bert Cameron, Melaine Walker, Juliet Cuthbert, Brigitte Foster-Hylton and Grace Jackson were flagged as also deserving of some form of public nods.

You could also add to the mix that the likes of George Rhoden, Lennox Miller, Dennis Johnson, Lorraine Fenton and a whole host of others worthy of permanent landmarks for the public to appreciate and never forget.

The ongoing debate moved on to those Jamaican non track & field sporting greats who may not have such public landmarks to honour them.

Statues for these sports stars are indeed fine as the country continue to develop its identity and create its own history. But lumping them in one outdoor spot may seem cumbersome. My own preference would be for a variety of landmarks and not just statues. As we have seen happen to the likes of Courtney Walsh, George Headley, Ottey and Quarrie. E.g. plaques, life sized paintings or buildings/schools named in their honour.

e.g. Some landmarks could be placed at the school where the former sport stars attended. Thus giving the relevant local community, educators and students a sense of pride, ownership and inspiration.

We accept that Jamaican children today have so few positive role models in their own space to look up to. They tend to learn mostly about the 7 national heroes who are from a bygone (but significant) age. So having an Asafa Powell landmark at his alma mater Charlemont High could help uplift the students and school’s public profile.

We all accept Jamaican kids and young adults know so little of their leading sporting figures from an earlier era because sadly the “Jamaicans don’t like to read” tag has become a common perception.

Which is why the idea of a sports museum is welcome and long overdue. My only wish is that such a venue is placed in the centre of the island. Kingston has more than enough major attractions.

Such a sports museum could be part of a much bigger complex that can host indoor sporting events as well as conference and lecture rooms to generate income. Could also add a sports reference library and novelty store.

When it comes to modern publicly funded sporting venues in Jamaica the likes of St Ann, Manchester and Clarendon have generally missed out for much too long.

There are some in Jamaica who are convinced that Asafa was the first major sprinter in it’s history and that he paved the way for Bolt’s success: not realising the island’s global sprinting prowess goes back to the early 20th century. A sports museum would be the ideal public space to help set such misguided narratives straight.

I do hope more Jamaican sporting stars – past and present – publish frank autobiographies of their own journey. This could help shed the “Jamaicans don’t read” tag. 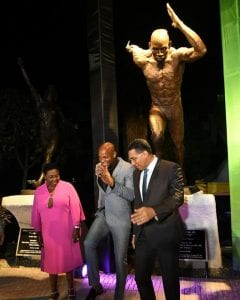 It wasn't me
View all posts by africanherbsman1967 →
This entry was posted in athletics, jamaica, jamaican and tagged asafa powell, jamaica, track and field. Bookmark the permalink.