My Athlete of the Decade: Novak Djokovic, Not Bolt or Lebron

If only Serbian tennis star Novak Djokovic was American and not Eastern European. Then his sporting achievements during the past decade would have given him a greater chance of making Associated Press‘ top five athletes of the 2010s. AP went with as their top 5:

The past decade and a half  in men’s tennis has been its most competitive in the Open era. The 3 of greatest male tennis players of all time in Djokovic, Roger Federer and Rafael Nadal have against each other on a consistent level during this era.

We can add -when fit- Andy Murray and Stan Wawrinka to the mix creating men’s tennis’ golden age without any question. No other current sport can match that the level of greatness, longevity and competitiveness amongst its top players. None.

Yes, King Lebron James went to 8 straight NBA finals and won 3 titles, but the Eastern Conference that he played in has long been recognised as the weakest of the 2 Conferences. So when Lebron eventually switched to the much stronger Western Conference (in 2018) to play for the Los Angeles Lakers, his team did not even make the play-offs (i.e. top 8).

[Things look a bit rosier this season for King James’ Lakers with the addition of Anthony Davies.]

The same logic applies to quarterback legend Tom Brady of the New England Patriots. When the Patriots went to 5 Super Bowls and winning 3 in the 2010s Brady was not even on the field during some of the key game changing moments. e.g. Patriot defense stopping the Seattle Seahawks on the one yard line in the 2014 Super Bowl in the dying seconds.

Usain Bolt has simply been great/unbeatable right up to 2016 before retiring in 2017.  Yet Bolt’s appearances against his main rivals was too limited for my liking. His 6 Olympic golds medals in the decade was phenomenal.

My main bugbear with Bolt during the 2010s was he restricted racing against his main rivals to just the Olympics and World Championship and hardly faced them on the Diamond League circuit. So Bolt would race Justin Gatlin solely at the major events meaning once or twice a year at the most.  So for me that was not enough of a genuine rivalry when you compare it to other sports such as tennis.

Yohan Blake (Bolt’s former training partner) recently disclosed that he was prevented by his coach from racing against Bolt at meets outside of the major global championships. In 2011 Blake was as fast as Bolt and for fans likes me it was sad not to see them race each other on a regular basis. Especially when Blake ran that crazy 19.26 for the 200m in Brussels in 2011.

But Djokovic faced the likes of Federer, Murray, Nadal, Wawrinka and Juan Martín del Potro on a weekly basis from January right through to November each year at grand slams and the top Association of Tennis Professionals (ATP) tournaments. These players had to remain at their peak for far longer period than Bolt, Brady, Lebron to remain successful and relevant.

In 2017, Djokovic went through a slump due to injury and poor form. Many of us Federer fans felt relieved and wrote off Djokovic’s chances of ever returning to the top. Yet by 2018 he roared back to form winning 4 more grand slam singles titles including the last 2 Wimbledons.

Who can forget last year’s Wimbledon final when Djokovic defeated Federer in a pulsating 5 setter that lasted just under 5 hours?

In team sports it can be tricky to chose one person as the standout performer for all the success. Lebron’s big wins was supported critically by the likes of Chris Bosh/Dwyane Wade (at Miami Heat) and Kyrie Irving (at Cleveland). Brady’s greatness has been elevated by the coaching brain of Bill Belichick (head coach ) and key players such as Rob Gronkowski and Julian Edelman.

Tennis fans and the sports media fraternity on a whole have been in awe of the elegance of Federer’s artistry on the tennis court. If you are are Federer fan it is difficult to show any love for Nadal much less Djokovic.

In any Federer vs Djokovic clash – especially at Wimbledon – spectators to tend voice their support loudly for the Swiss genie, which Djokovic uses as motivation to overcome his much vaunted rival.

But the resilience of Djokovic, his mental strength to grind out victory after victory against those 2 other great rivals in particlaur needs to be respected far more by the wider sporting media fraternity.

Since AP started the male athlete of the year award in 1931 it is worth noting that only 6 non-Americans (Ben Johnson, Wayne Gretzky, Gunder Hägg, Herb Elliott, José Altuve and Ingemar Johansson) have won this award. No Bolt, No Federer, No Michael Schumacher, No Pelé.

You would have expected Bolt to have won the AP Athlete of the Year in 2009 when he was at his superlative best. US racing driver Jimmie Johnson won the award in 2009.

On the women’s side only 11 previous winners of AP female athlete of the year award were non-Americans. During the 2010s, tennis superstar Serena Williams won the award 4 times (overall 5). In fact a tennis player has won the female award roughly 28 times since 1931.

Context is all well and good but when it comes to sports journalism this kind of insular assessment of sporting excellence by the AP is just too shallow. But each to their own

If Novak Djokovic was American – with such level of success – he would have been so Niked up and featured the on US sports version of Mt Rushmore for 2010s. He’d be doing Dancing with the Stars, ESPN 30 for 30, and a regular on the late night chat shows. He’d probably be starring in some action film with The Rock.

For Novak Djokovic to appear in 58% of the 40 grand slam singles finals during the 2010s and win 38% of them against those great rivals, means he is my athlete of the decade. 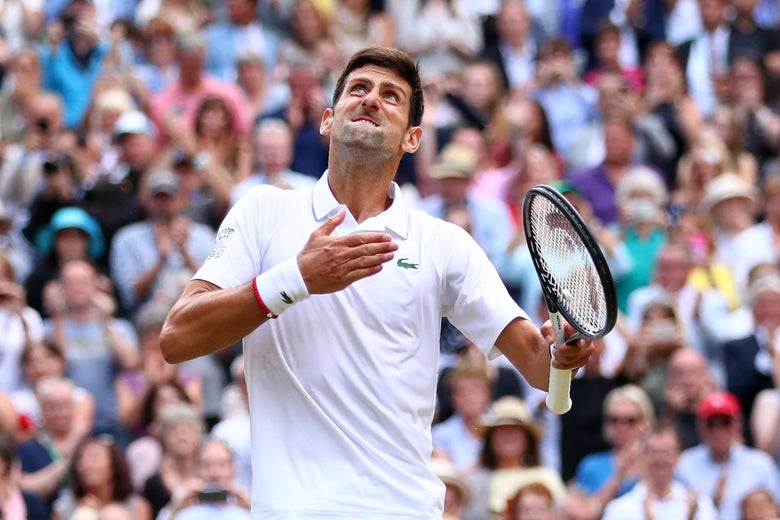