Case Closed on Boris and the Conservative Party

The Conservative Party has had ten years of power and it is time for the UK electorate to trust something else.

The Conservative governments of this decade have been insensitive, hateful, reckless, deceitful and smug. The austerity measures they enabled has created the kind of poverty not seen for generations and it is time the UK elects a government that will bring some justice to those who were mistreated by the Conservatives.

Boris Johnson cannot be trusted to lead the UK. From his early days as a journalist he never has been one for honesty. The UK can ill afford to allow someone with Boris’ iffy track record in Downing Street for the next 4-5 years

What has protected Boris from deeper scrutiny and harsher criticism is his long standing connections across the media landscape who have created a solid firewall since he became Mayor of London in 2008.

Boris Johnson has put together a dangerous right wing cabinet. Any cabinet that has the likes of Sajid Javid, Michael Gove, Zac Goldsmith, Esther McVey and Priti Patel should be of concern to the public.

How can anyone vote for Boris after – as Mayor of London – after he sold off London’s Olympic Village (5000 homes) to the Qatari royal family?

UK tax payers money had built those homes they were earmarked for affordable homes for Londoners until Boris and his mob got their oleaginous hands on them.

Never been has someone held 3 of the great positions in UK public life (Mayor of London, Foreign Secretary and PM) and not prove themselves effective at any of them. I dare anymore to name one decent achievement for Boris at the Foreign Office.

[“(Mayor) Boris  was a poor manager, administrator and politician, apart from the campaigning, which he’s brilliant at, and the same thing is happening at the Foreign Office. What you hear from officials there is that there’s no direction, there are no ideas, it’s all chaos and he doesn’t care, but nor does he seem competent to do anything about it.” – Sonia Purnell, 2012]

Johnson is living proof that there are some people who do not need to work hard to achieve important positions in British public life.

In the short time Boris has been PM he broke the law and even lied to the Queen when he suspended parliament for his own selfish plans. Yet still he was allowed to remain PM.

The idea of a shyster duo Boris Johnson and Donald Trump committing UK troops/resources to wars to suit their financial benefactors – such as a the Saudi royal family –  is too much for me to contemplate.

The Conservative manifesto is well crafted and yet it is thing on detail. But you can smell the stench of further cuts and outsourcing coming if Boris wins on Thursday.

Some of the pledges in the manifesto include.

I am still baffled by the number of Labour supporters willing to back Boris Johnson  because of one topic (BREXIT) despite disagreeing with the Conservatives on everything else.

In 2015, if I was given 600 guesses on which MP could one day be prime minister I would never have mentioned Jeremy Corbyn.

Not because Corbyn is not PM material. But in the 30+ years I have known and observed Corbyn’s political career he never once hinted at such lofty positions. He always concentrated his endeavours on social justice.

Corbyn as leader in the past 24 months has evolved. I have been one of Corbyn’s harshest critics over the way he remained placid despite the personal attacks on him by fellow Labour colleagues. But Jeremy has done it in his unusual calm way.

Since becoming leader Corbyn has faced mass resignations from his shadow cabinet from the Blairite and Brownite wings. Many felt such concerted moves would force Corbyn into resigning as well. But Jeremy held his ground and used these departures to promote some of the newer intakes of Labour MPs to the shadow front bench.

Some of these fresher shadow members have shown great potential including the likes of as Laura Pidcock and Rebecca Long Bailey. Seasoned MPs such as John Healy and Barry Gardiner have come out from the backbench wilderness and found their voice.

Unlike some of his predecessors Corbyn has shown a propensity to listen and act accordingly. Take BREXIT for example. Everybody knows Corbyn has been anti-EU long before anyone heard of Nigel Farage. Corbyn accepted the results but he has listened and appreciated that a better exit deal could be achieved with the EU which would have long term benefits for future generations.

Corbyn has also attracted more young people to politics and that is significant for the Labour Party going forward.

Jeremy has held his own in the debates and in final head to head with Boris last Friday put in his best performance. Corbyn didn’t get to where he is by being some tv act like his main rival  but he stucked to the issues important to Labour.

Jeremy has fronted up during the campaign and not hid as Boris has done constantly.

Some of the less headline grabbing pledges include:

Labour’s plan to renationalise certain sectors may prove challenging, as the fine prints in existing contracts could make such intentions too expensive to fulfill.

But a Labour government must bring back water into public ownership.

Gordon Brown, where have you been?

Former Labour PM, Gordon Brown called Corbyn ” a phenomenon” during an interview with the BBC’s anti-Jeremy-click-bait correspondent – Laura Kuenssberg* – where he agrees with Corbyn on social justice.

If only Gordon have intervened earlier then maybe Jeremy would not have faced the constant attacks from the Brownite wing of the Labour Party.

With the polls said to be tightening the smear machine against Corbyn is in full flow with the much disgraced Tony Blair and former MI6 chief Richard Dearlove leading to attacks. What has been unacceptable is the enablers at BBC who are amplifying such smears and clearly showing their own bias. Even the BBC World Service has joined in the smear campaign.

One of the key reasons for this all out attack by former Labour figures such as Blair is to prevent a Corbyn government from accessing sensitive information regarding some of the more shameful actions of recent UK governments.

I just hope Corbyn can convince enough voters to form at least a coalition government.

A good way to start the decade is for Boris Johnson to ride off into the West London early sunset and back to reading teleprompters at Have I Got News for You. 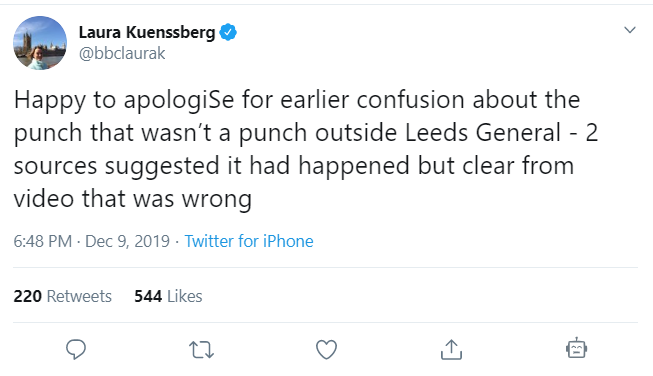 John Bercow is Jewish. He has known Jeremy Corbyn for 27 years. He was asked if Jeremy was anti-Semitic. His answer was profound pic.twitter.com/xYz7Tp5elu