Is the PNP Finally in Renewal Mode?

The popular term “A week is a long time in politics” has recently manifested itself in Jamaica.

Crawford initially took the by-election loss very hard but given he was there in the constituency for less than 6 weeks I think he did well, considering. Anne Marie Vaz is a permanent resident of Eastern Portland has been preparing for this moment for 2 years.

This by-election result was regarded by many observers as a shock given Eastern Portland has long been a safe PNP seat. The defeat has led to growing talk that the PNP’s chances of any future political successes were dwindling fast. The PNP’s supporters were feeling rather flat and downcast.

Indeed, the PNPYO (it’s youth arm) were not impressed with the overall performance of their senior colleagues and made their views abundantly clear. The PNPYO called for – amongst its 20+ recommendations – for a reshuffle of the shadow cabinet. PNPYO has felt that some senior colleagues were trying to muzzle their voices in calling for real changes to the party.

Understandably, Peter Phillips leadership of the PNP was facing serious questions. I have suggested that Phillips should at least face a serious leadership challenge if he was not prepared to raise his game.

The win in Eastern Portland had energised the JLP even further. Some senior JLP figures  have boldly stated that no PNP seat is safe anymore.

Then a week after the Eastern Portland by-election result, along came some stunning news that gave life and optimism to the fortunes of the PNP.

The PNP had won their legal challenge at the Supreme Court over aspects of the JLP government’s planned National Identification and Registration Act (NIDS). In fact, the PNP legal team got more than what they expected when the court ruled the entire NIDS legislation unconstitutional.

Suddenly the PNP got an unexpected opening and since then they have turned up pressure on the government in ways not since the JLP returned to office in 2016.

The much maligned Peter Phillips has raised his game and has become more vocal, resolute and visible as a leader.

Damion Crawford – despite his recent lost – is acting like a winner. His immediate humbling reaction -via media interviews – to the loss has earned him respect across the political divide. Crawford has promised to remain in Eastern Portland constituency and fight the next general elections.

By conducting free mathematics lessons for students who are perparing for end of year exams in Portland, Crawford has earned plaudits from students who attended those classes. 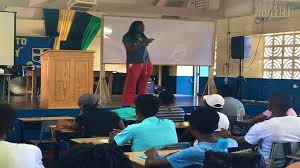 On Crawford’s return to opposition senate benches, government Senator Don Wehby said to him  “Let me say this with all sincerity: We need more people in politics like you with that passion, that belief without compromise in terms of what is right for this country,”.

Peter Phillips’ promised shadow cabinet shuffle should see a promotion for Crawford to one of the more important portfolios.

Lisa Hanna – Renewed and Revved Up?

In Gordon House recently, Lisa Hanna, opposition spokeswoman on foreign affairs and trade, prompted Prime Minister Andrew Holness to answer questions about his recent meeting with US President Donald Trump that was held in Florida.

Hanna raised concerns on why Holness was not taking a more neutral stance over the US government’s current hardline policies and actions towards the Venezuelan government. Hanna was not impressed at how Holness seemed to sideline CARICOM in order to engage and back the Trump administration over Venezuela.

That exchange in Gordon House led to Holness admitting that it was better for his government to be at the table with the US rather than doing the opposite. To me that is such a dangerous stance especially when you have neoconservative hawks such as John Bolton, Trump’s National Security Adviser, driving the regime change policy against the current Venezuelan government.

[The latest mixed messages by Bolton (keen on invading Venezuela) and Trump (not 100% keen after speaking to Putin) highlights the potential risks and confusion that Holness should keep Jamaica away from.]

During the sectoral debate, Hanna, delivered one of the best speeches I have heard from any parliament. Her speech was informative, succinct, humourous, engaging, timely and constructive. Hanna earned applause from her PNP colleagues and also government ministers across the floor including Prime Minister Holness and Finance Minister, Nigel Clarke. Karl Samuda, Head of Government Business said of Hanna’s speech: “Mr Speaker, it is fair to say that was indeed an excellent presentation”.

The once solid health minister, Christopher Tufton is facing a more resolute and confident opponent in shadow spokesman Dr Dayton Campbell, who has managed to wrong foot him much to the government’s embarrassment.

Despite this up turn in the PNP’s political fortunes, Peter Phillips has quite rightly promised to reshuffle his shadow cabinet and remove the ineffective performers.

Other PNP MPs that have improved their efforts as effective opposition spokespersons include Peter Bunting and Mikael Phillips.

In the senate, the PNP continues to hold the upper hand own against the government. Senators Lambert Brown, Donna Scott-Mottley and K.D. Knight are just a powerful trio whose differing styles blends perfectly in keeping the government members on the backfoot.

The recent addition of Dr Andre Haughton (terrific maiden speech) to the Senate was a wise move by the PNP. [I would have preferred Ashley Ann Foster, but I am not even sure if she is still in politics]. Thus along with Crawford back in the Senate, it will ensure the PNP does not let up in its scrutiny of the government.

[The addition of young Robert Nesta Morgan to the senate will be give the government much needed back bone and gravitas in the upper house. Senator Delroy Williams (Mayor of Kingston & St Andrew) is a quiet but effective voice on the government benches and is one to watch for higher office]

What next for PNP?

Peter Phillips has promised a reshuffle of the shadow cabinet which is long overdue. But the PNP still falls flat on the issue of including more women in its senior ranks.

Prime Minister Andrew Holness continues to be the JLP’s main trump card with the public and is growing into a formidable debater in Gordon House. But Holness is not superman and thus he is undermined by the ineffectiveness and performances of some of his own ministers. Holness may need a mini reshuffle of his own. [Having 4 Ministers without Portfolio in the cabinet based at the prime minister’s office still looks a bit complicated.]

Can the PNP keep up this new found momentum of effective opposition?

Jamaicans, what ever their political persuasion, deserves and expects an effective opposition. Thankfully it looks like the PNP have woken up from its hiatus.

But as we know in Jamaican politics, all this new found energy could easily blow up if the PNP leadership gets complacent – even for just one week.