I am no fan of the proposed national ID card system in Jamaica. Having worked around government databases for 3 decades, I have learnt that society has to  question a government’s desire to hold more information on its citizens.

The Jamaica Labour Party (JLP) government is pushing ahead with introducing a controversial compulsory National ID card system. Quite rightly many Jamaicans are concerned as every single person aged 6 months to infinity will be forced to register for a national ID card. The opposition People’s National Party (PNP) has taken the government to the Constitutional Court to challenge government’s plans.

Consulting, designing implementing and maintaining such a programme will be far more costly than the $US68 million loaned to the government by the Inter American Development Bank (IADB). Such IT projects will always over spend despite what proponents of the scheme inform the public.

The government is trying to convince the public that having a national ID system will help to reduce crime and fight corruption.

How does a multi million dollar national ID card system..

Jamaicans currently have numerous identity platforms in place whether it be;

The government is keen to lump a number of the above into one system for the national ID card. It is always risky to pool so much data on to one information management system. Hackers will be delighted for starters. But what happens if the card is lost or stolen? How quickly can it be replaced? Multiple ID on a various platforms is always a safe option that can reduces misuse of personal information by unscrupulous groups.

The government has warned that not holding a national ID card will prevent access to normal government goods and services. Well is that bullying of the worst kind and an erosion of a person’s basic human rights?

[The  Israeli government  has been trying (unsuccessfully) to agree waiver visa free arrangements with the US for its citizens. To ensure they could get such an arrangement signed off, the Israelis offered to the US authorities access to Israel’s fingerprint biometric records.]

This push for a compulsory national ID card reminds me of the UK experience which cost billions of pounds and eventually failed.

The idea of a UK national ID Card was first mooted in the mid-1990s by then Prime Minister John Major and his Home Secretary, Michael Howard. One of Howard’s special advisers at the Home Office then was a young David Cameron.

In the aftermath of the September 11 2001 terrorist attacks in the US, PM Tony Blair and his Home Secretary, David Blunkett, were now convinced that a compulsory national ID card programme was necessary as an anti-terrorism measure.

Many felt  that Blair was pushing for compulsory ID cards just to impress US President George W Bush.  Blair’s Finance Minister, Gordon Brown, felt the idea was a waste of money.

Other senior Labour cabinet ministers were not keen on National ID cards being made compulsory. Others felt that existing personal identity platforms such passports, social security and employment cards were sufficient in an open and free society like the UK.

In 2003, a research team in the UK’s Cabinet Office was tasked to review national ID card systems across the main Western nations.

Most of the countries consulted by this research team stated they never saw the need for national ID cards. These nations felt they had adequate information and knowledge management systems in place that captured the required basic data on its citizens. E.g. passports, social security, tax related data. Some countries had voluntary ID cards systems.

By April 2004 Blair and Blunkett announced the draft compulsory national ID card Bill. The initial estimated 10 year cost for implementation and maintenance of the programme was set at between £1.3bn and £3.1bn.

(By 2009 those figures were significantly revised upwards & the projected cost for the subsequent 10 years was £7 billion!)

The Identity Cards Act 2006 became law.  Charles Clarke (Home Secretary) and his team at the Home Office were responsible for implementing the programme. The national ID project team was made up of civil servants and private sector specialists.

Some members in the project team were not convinced that the national ID cards was viable due to the ever increasing cost. The initial idea was for ID card details to be stored on a new super database. But the database was proving problematic for the designers. Also the IT security measures was proving a real challenge

Mid 2006, new Home Secretary, John Reid (Charles Clarke was fired) scrapped the super database plan. The necessary information was to be captured from data already held by Department for Work and Pensions, the Home Office and the Immigration and Passport Service.

4 major contracts were concluded by Home Office with private companies.

Thales, Fujitsu and IBM were in the bidding for the lucrative contract to develop the cards’ design and handle their production. But with cost growing out of control the Home Office got cold feet and dramatically pulled the bidding process.

By 2009 Gordon  Brown had taken over from Blair as Prime Minister. Alan Johnson (Home Secretary) announced that the national ID cards programme will continue to roll out but would no longer be compulsory.

Gordon Brown lost the general elections in 2010 and (former Home Office adviser) David Cameron became Prime Minister. One of Cameron’s first decisions was to scrap the entire National ID programme. Cameron felt the programme was a waste of money and an attack on civil liberties.

The only real winners during the whole exercise were the IT and consultancy firms.

In the age of the Donald Trump, Jamaicans should be concerned that the US could one day demand unlimited access to the national ID database.

Will the government sell the personal data to interested parties such as marketers, medical companies, tourism industry?

We have seen disturbing stories where tech giants such as Facebook have passed on personal data on its users to other companies. So can we trust our governments from sharing the private data of its citizens to others?

Hackers will be wetting their finger tips knowing breaking into one single source will give them access to a treasure trove of personal information.

Today, hacking of any major IT infrastructure is big business and has become a lot easier. No IT system is impregnable, despite all the anti-hacking mechanism on the market. We have seen teenagers easily break into IT systems held by the FBI and CIA.

As usual Jamaican governments just keep borrowing too much money from international bodies and other countries.

Since its inception the largest contributor to the IADB funds has always been the US. We know Donald Trump has a dim view of international bodies like the United Nations and indeed the IADB. He doesn’t think much of the Caribbean either despite recent overtures to Jamaica, Haiti and St Lucia.

Despite no ruling from the courts on the PNP’s legal challenge, the government is proceeding onwards with getting the national ID card system ready. On the day after the euphoria of the government’s recent win in the East Portland by-election, they quietly issued a statement via the Office of the Prime Minister

“Cabinet has approved a US$31.7 million contract to the group led by Productive Business Solutions (PBS)……. for the provision of Data Centre Hardware, Software, Public Key Infrastructure, and the NIDS solution to be implemented over five years…

Following the National Contract Commission’s (sits under Ministry of Finance) approval on February 28 this year, Cabinet reviewed and approved the submission on March 11.”

This recent announcement could eventually raise eyebrows. Up until April 2018 – was the deputy chairman of PBS the current Minister of Finance, Nigel Clarke?

But we await the Constitutional Court’s ruling – on the legality of the national ID card programme – this Friday. [ Update 12 April 2019 – The court ruled the NIDS Act null and void!] 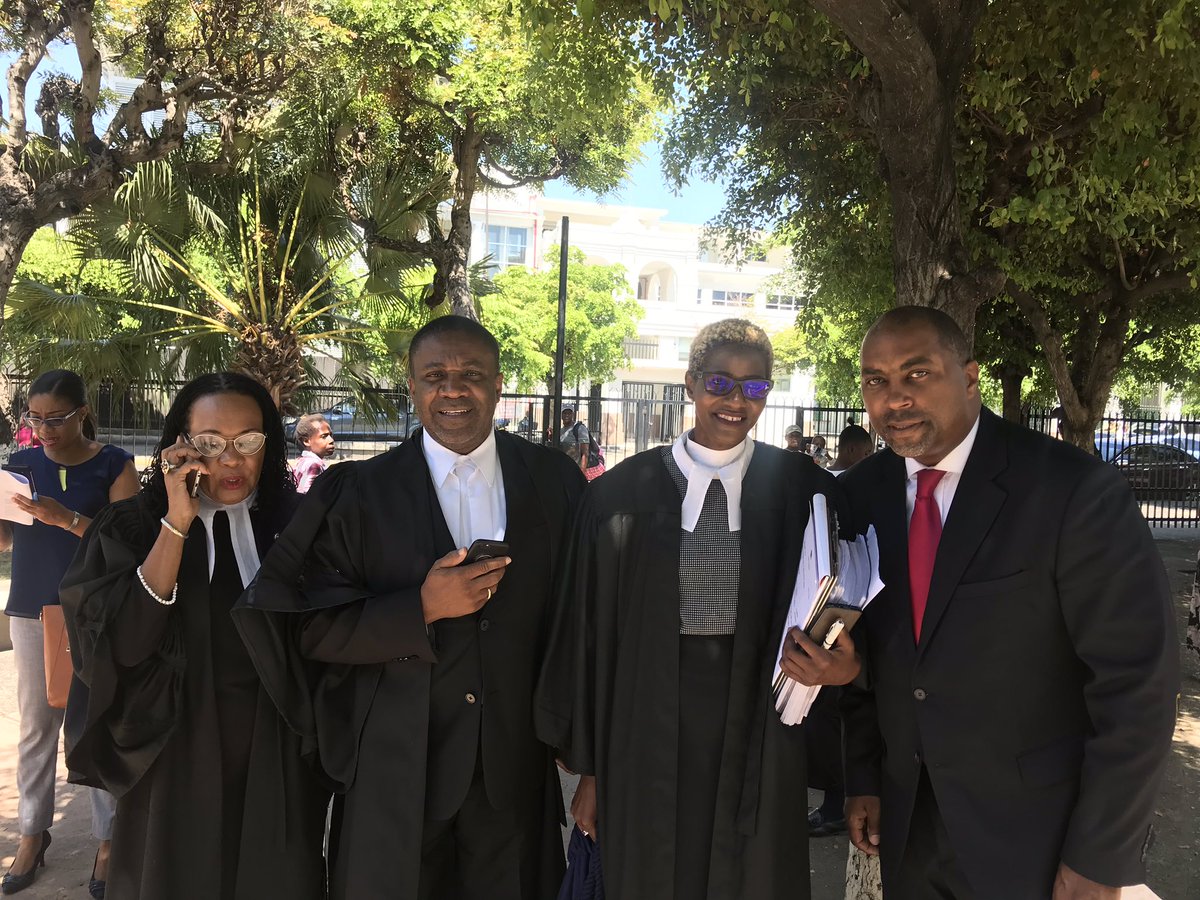